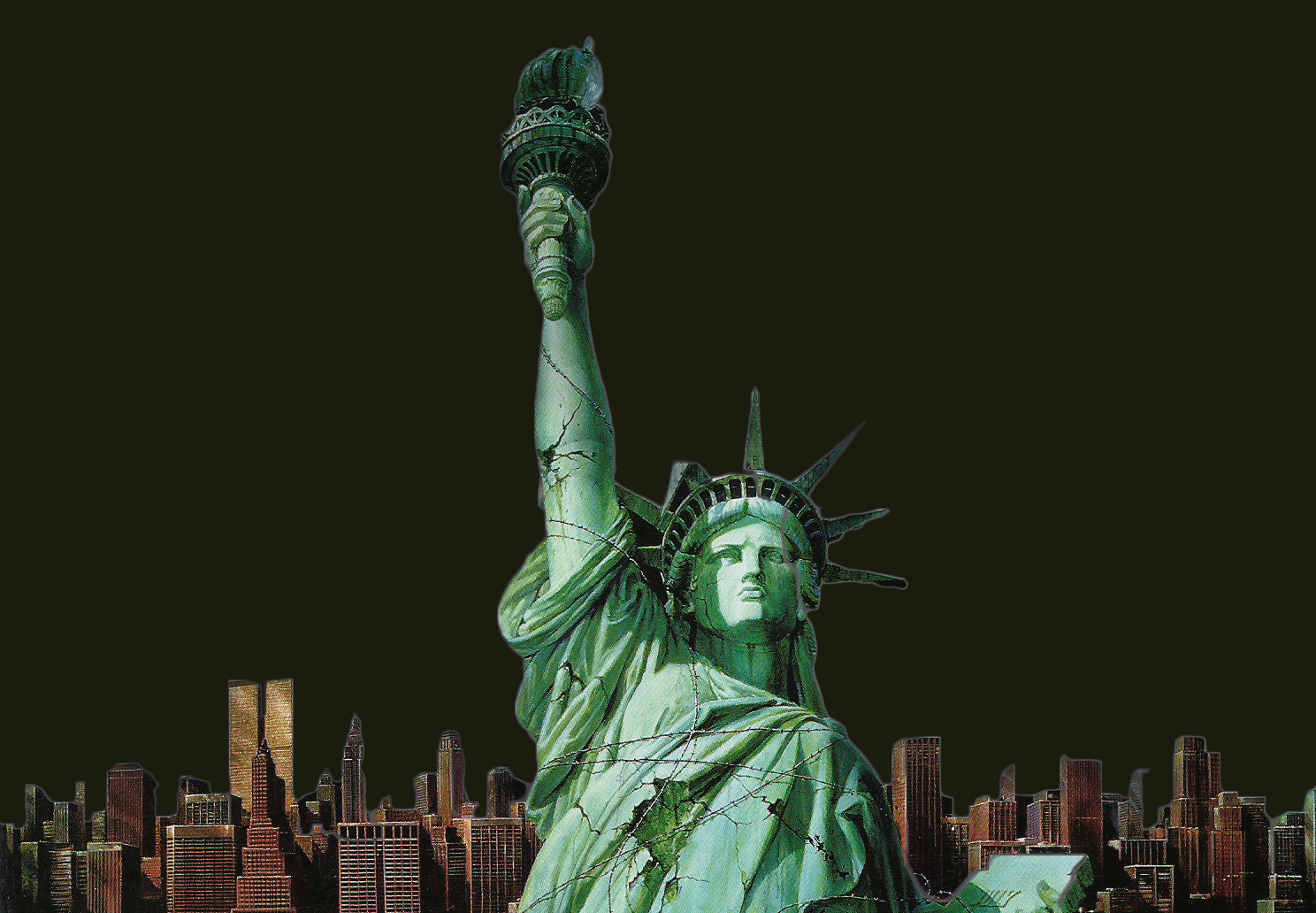 Snake Plissken has influenced and shaped our lives since we’ve been 14 years old. We met due to Snake, founded a company and are close friends since 1996. Countless stories with and about Snake influence our daily life. Snake plays a central role in our social lives, and our families bear all that bravely.  As a matter of fact, even a son carries „Kurt“ as his middle name. It would take way too much space to explain what Snake Plissken means to us, but you should have got a vage idea by now.

January 26nd 2016 became our big day: After 35 years of admiration, we had the opportunity to interview Kurt Russell in the course of his promotional tour for „Hateful 8“. A dream come true …

Thanks for the opportunity. The constellation with two interviewers is a bit unusual - we´ll explain that later.

Let´s talk about „The Hateful 8“. Small room. Eight people.
It´s a little bit like „The Thing“ …

Indeed. One of the things Quentin (Tarantino, editor’s note) did before we started shooting was to screen „The Thing“ for the whole crew. He wanted them to see the similarities: You got a monster outside – in the case of “Hateful 8” that is the storm that’s preventing you from leaving. And you’ve got to deal with what’s inside - the people. And nobody knows who the other guys are, theoretically. That creates a situation in which paranoia runs rampant. This story is not about the „who done it?“, it’s more about the „who´s gonna do it?“.

You play the bounty hunter John Ruth, who is a real Western character.

That´s right, he’s an iconic Western character. I really loved to play that character because I’ve never had the chance to play someone as bombastic as John Ruth before. Aside of that, I think he really is a very interesting character within this movie of hateful people. Because he is choosing to carry out the cornerstone of the American justice system. No matter how significant or small you are, no matter how bad you´ve been: You gotta get your day in court. You can’t just buy off the judge like in the old world and there’s no king who says: „He’s a friend of mine, he’s ok“. John Ruth wants to make sure that even someone who is cruel and deserves to be shot in the back of the head, like Daisy Domergue, gets her day in court. And he puts himself to great risks to do that - unlike the Major (Samuel L. Jackson, editor’s note), who just shoots the guys and drags their corpses in.

You’ve had something like a comeback now. After several years of wine making you did “Bone Tomahawk”, “Fast & Furious 7”, “The Hateful 8” and “The Art of Steal“. Why did you take such a long break?

I worked plenty in my life, I just didn’t need to make movies. And I didn’t like most of the scripts that were presented to me - until it came to „Bone Tomahawk“. That film was just made before we did “Hateful 8”. As for “Fast & Furious 7”: The movie had a pretty short shooting schedule, so it worked out fine for me. I was soon able to stand in the vineyards again.

Have you learned anything about yourself during the times in the vineyards?

Oh, yes: That I make good wine! I’m very serious about it.

Yes, she´s going to play the wife of Mark Wahlberg’s character. I already knew that when I was offered a role in the movie myself. I liked the script because it deals with an important occurrence that really happened. And now I will also do the sequel to „Guardians of the Galaxy“, which could be a lot of fun.

Now it’s time to explain why we are two interviewers: We had the honor to make the additional German DVD-audio track for „Escape from New York“ some years ago because the company Constantin knew that we are “experts” …

We are big fans of Snake Plissken and we know a lot about the movie. We’ve seen it countless times.
As a matter of fact, we first met because of Snake Plissken 20 years ago and he somehow was the reason why we founded our media-company.

We both saw the movie for the first time when we were 14 years old. And we met 1996, when “Escape from L.A.“ came out. Without Snake there would be no company and all employees know about that fact. No jobs at teleschau without Snake Plissken.

Many fans still hope for a third movie about Snake. Wouldn´t it be interesting to see how he acts and lives as an older man?

Back in the times when I made lots of movies, the studios were just starting to do sequels. However, I never liked the idea of sequels that much. Although I could have done many of them. Today they call them franchises. I had the chance to do another “Stargate”, for example. Also, I could have done five different versions of “Tombstone”, sequels of “Overboard”, “Backdraft” and so on. Some of my movies were turned into television shows, like “Backdraft” and “Stargate”. But I was never interested in that. I always wanted to do something new.

For “Ecape from L.A.” you made an exception …

When John Carpenter and me did “Escape from L.A.”, we agreed that it was the last chance to portrait Snake Plissken in a decent manner. I was still a good athlete and still in shape, I still looked like Snake. So you can watch “EFNY” und “EFLA” back to back. But I really don´t want to do another one. I was only joking one day when I talked about “Escape from Earth”.

Where did that idea come from?

Snake wants to get out of this world in a way. So “Escape from Earth” was my own Snake-Plissken-joke, looking at things from Snakes point of view. However, instead of doing something with John Carpenter that we have already done, I would rather do a fresh, completely different and weird thing with him. So no, I don’t think another Snake-movie would be interesting.

Quentin Tarantino, Robert Rodriguez and many other filmmakers name “EFNY” as one of their favourite movies. There are YouTube-movies, comics, shirts, fansites, all about Snake Plissken. What´s so special about him?

People like to watch movies and to be tracked off certain things. But when John and me introduced Snake Plissken, the idea of that movie was really scary for the studio.

Because there was no redeeming quality in this guy. The story doesn’t start with his wife and children being dragged to the streets of Rome to be burned to death. He just has no reason to be the man he is. He just showed up that way. And he is someone who doesn´t want to hang out with anybody. Snake doesn´t want to hang out with you guys, he doesn´t want to hang out with me or John Carpenter or anybody else. But there is certainly an appeal to that guy. Every man feels that desire to be an island some time, but no man can do that island thing like Snake Plissken, who is pretty much in control of his own destiny. I think that’s why he has become such a fascinating character to many fans. He lives in a really strange world.

In preparation for this interview, we read many articles and they all introduce you as a “legend”. How does it feel to be a “legend”?

That’s just a phrase (laughing). I just created many memorable characters - you see them and you remember them. You remember Jack Burton in “Big Trouble in Little China”, you remember Wyatt Earp in “Tombstone”, you remember RJ Mac Ready with his sombrero in “The Thing”.

Oh, is that real? That‘s cool! (Kurt takes the DVD-cover and looks at the motive that shows the cobra-tattoo on Snake‘s arm instead of the stomach as it is shown in the movie.) This picture was taken before I got in shape and before we did the movie. There were about six to nine months in between, and I said that I don’t want to have Snake with a tattoo on his arm: I want him to have this tattoo as a part of his cock.

In recent years, many people somehow rediscovered Snake Plissken. We, by the way, are also showing the movies to our children …

What’s weird about this is that the younger generation gets to like Jack Burton or Snake Plissken more and more. There is also a new generation of critics who see that stuff now. I have to admit that it does make me feel good when the young guys say: “What the fuck, this was great, why didn’t I know about this?”

Since the interview time is running up: Could you sign a few things for us? Maybe you wonder why this glove compartment is lying on the table. We want you to sign it as well (one of the interviewers shows Kurt a picture of his Death-Proof-Chevy-Nova-Stuntman-Mike-Car with skull and duck on the bonnet).

Oh, that’s cool, that’s very cool! Nicely done! The duck is great.
And you want me to sign the glove compartment?

That would be great!

That display stand from the 80s is cool - look at the gun! “Die Klapperschlange” (he reads in German). It’s cool that you guys came together because of “EFNY”! I like that. Thank you. I’m glad you guys enjoyed it like you did. That was really fun and cool.

Kurt signed all our fan-stuff with much laughter and took some photos with us. Then one thing more happened: Shaking hands at the end, Kurt pauses, looks at Kai and says:
We just met each other, it was in L.A.”

(Background: Kai met Kurt Russell 20 years ago when “Tombstone” came out. He forgot to ask whether there would be a sequel to “EFNY”, so after the interview, when Kurt was just leaving, Kai ran to the elevator. Kurt, while the elevators door was closing, told Kai: “They don’t know, they are talking about it”. When “EFLA” was released, it said in the press sheet that Kurt had been asked about Snake Plissken a lot when he did interviews for “Tombstone” in Europe – especially in Germany. These penetrating questions allegedly led to the decision to do “EFLA”. Since then, one of the interviewers takes up the cause of having been (at least partly) responsible for the realization of “EFLA”.